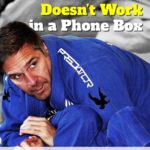 Amongst the first in the UK to be awarded the coveted Black Belt and an inductee of the Martial Arts Hall of Fame, Gary is a former BJJ European Champion who also fought in MMA tournaments during his competitive career.

“Karate Doesn’t Work In A Phone Box” is his story.

Gary Savage is one of the old school martial artists in the United Kingdom; like many of his era, Gary started in traditional martial arts, long before Brazilian Jiu Jitsu arrived in the early 90’s and this book is one man’s journey in the martial arts, together with a background into Gary’s troubled life as a young man.

What separates this book from many others in its genre, is that it’s also a book about one man’s ongoing battle with a crippling mental illness that was rarely talked about thirty to forty years ago, nor was it understood back then.

As you read the book, you learn that Gary was eventually diagnosed with bi polar disorder which goes a long way in Gary coming to terms with what was just seen as being ‘in a mood’ back then or just plainly ‘up and down.’  One minute you’re hyperactive and bouncing around, the next you’re as low as can be and people didn’t really understand the symptoms back then and I dare say still don’t today, but a book like this helps the reader understand the symptoms that the author has been through.

The book is a story about one man’s life and journey from an angry young kid into an angry young man and not having the first idea as to why this was so; it’s a very deep and personal book and must have taken a lot of courage to write down into words some very painful parts of one’s life, in the hope that it can go some way into helping others in a similar situation recognise their own symptoms and get the help they need.

It’s also a funny book, packed with tales of martial arts prowess and a journey through the striking and grappling arts of the 70’s, 80’s and 90’s and that age old misconception that you can get the better of your father. Not so with Bill Savage, Gary’s father, who’s infamous words to his son makes for the title of the book.  Even in his late teens and early twenties, Gary would take on his ex military father in the front room of their house with the same conclusion…Bill’s slippered foot across Gary’s throat as he lies prostate on the floor.

The book charts Gary’s personal training in the arts and his numerous scrapes with the law as an angry young man and at a time when people got paid to have a scrap in the guise as the local doorman.  As Gary progresses through the traditional martial arts route, the book goes into describing how Gary made the move to the ways of Brazilian Jiu Jitsu, when it finally landed in the UK and how Gary made the sacrifices that so many Northerners had to do, just to get a Jiu Jitsu class that people today take for granted.

We hear about tales of BJJ competitions that were pretty thin on the ground when Gary was a white belt, together with MMA training and the challenges that came way back then (and still do today) and of course, the ultimate training holiday, that of going direct to the source and training in Brazil with Mario and getting to meet one’s hero in the shape of Rickson Gracie.  The book has it all, as there are not many books out there that chart the early days of BJJ in the UK, especially from a Northern perspective, as so many of the early Brazilians tended to gravitate towards London and not the freezing cold barren landscapes of the North.

Gary also reveals his ongoing love and passion for the Mod scene, to which Gary is still an active devotee of the scene today, with Gary reminiscing about long scooter weekends by the sea, peppered with all nighters, girls and yes, plenty of fisticuffs along the way.

It’s a book about martial arts and life and how both intertwine in one person’s life; how all that training has been a bedrock in life and has helped him come to terms and deal with the bi polar disorder that Gary was to be later diagnosed with.

In the book’s epilogue, Gary quotes Hemingway who says ‘in order to write about life, first you must live it’ and Gary has certainly lived a full life so far and dare say will continue to do so and if this book helps just one person in a similar position to Gary, then it’s job done.

Carl Fisher is a lifelong martial artists with thirty years’ experience in the arts, holding back belts in Brazilian Jiu Jitsu, Applied Jiu Jitsu and Karate; Carl runs Wimbledon BJJ in South West London and is chief grappling instructor at Precision Self Protection.

The book is available online at https://www.amazon.co.uk/dp/B081VQHG2J